Is Tannehill the right call in Miami, right now? 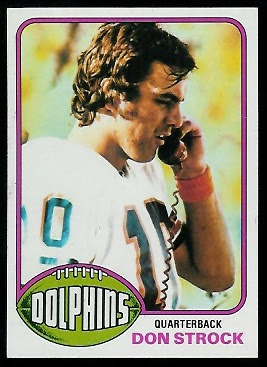 Former Miami Dolphins quarterback, Don Strock, was interviewed for The Finsiders blog this week, which was interesting because writer, Andy Cohen, later repeated Strock's answers on being a back-up to the team's current second-stringer, Matt Moore. He cleverly reported this in the story.

What stood out was Moore’s maturity and patience on a matter that would grind the gears of most QBs until they combusted.

But it’s warm and sparkly down in Florida, you see, where spirals probably glisten a little more en route to the hands, cheerleaders seem more sprightly and full of bounce, and melting ice cream in the swelter tastes fruitier to the tongue.

So why blow up over holding a clipboard in the sun, right?

One nugget from Strock to Moore was, “Your time will come”, which the current back-up knows all too well.

Moore responded, “Well, it’s come true in the past for me. So if history repeats itself, I guess my time will come."

Moore is a guy who says the right things, and then when he hits the field, mostly does alright too. And they said Tom Cruise had all the right moves. Well, he did, until about the second Mission Impossible flick. It seemed to get a little strange after that. Perhaps it was all the John Woo slo-mo sequences that messed up his equilibrium.

The thing is, I’m still not convinced Ryan Tannehill should be Miami’s starting signal-caller, even after his decent rookie year. I like his upside, don’t get me wrong. He has arm strength. He can run. He looks business-like at press conferences and his wife hits it out of the ball park before the pitch is even thrown.

But still, I don’t really care about media moves and showy draft picks for the sake of ticket sales – I care about wins. And if you’re a Fins fan, you’d certainly be asking yourself after the Hall Of Fame Game on Sunday - other than how does Chris Collinsworth get the part in his hair to stay like that – should I be worried that Tannehill looked shaky?

Yes, it’s preseason. And it was just five plays. Yet, Moore came in, and as it always does when No.8 sets up shop behind center, the offense moved. Sure, he made a couple of questionable calls himself. We all have. I’m still getting ripped for a pair of pants in my closet I thought were men’s. This whole ‘skinny’ fashion trend is so confusing.

The point is, Moore gives the team more - quite literally. Certainly he’s a little loose – somewhat Favrean, if you will. But as long as he stays retired when he eventually hangs the cleats up, and keeps the crotch selfies to himself, I’m on board.