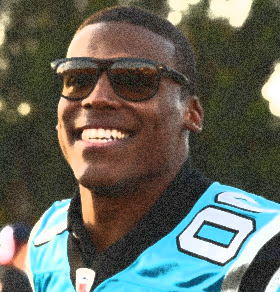 When broadcasters say, 'he's a football player', the fan presumes they mean the guy who plays football holistically, not simply to fulfil the specific duties of his position. It's a strange comment to make because certainly most NFL players consider themselves "football players", not merely spare parts of a team.

Having watched Cam Newton slide onto the NFL stage with all the gusto of Snagglepuss, however, the notion of a football player suddenly feels more definitive. The definition is Cam Newton. Newton has had so many detractors since announcing his eligibility for the NFL that you wondered if all the over analysis and tea cup storming would result in yet another JaMarcus Russell. Newton, who is sized similarly to Russell, is not only more athletic, but more confident, debonair and enthralling. This player, to put it mildly, is a football star in the making - if he isn't one already.

What makes Newton so attractive is his presence: he is commanding on the field. In his first two outings - against Arizona and Green Bay - Newton has not only piled up yards (854 in all), but his completion percentage is at 63% (52 completed of 83 attempts). He owns the passing game, not simply by virtue of his accuracy (and he has been mostly accurate despite what the experts have said) but his decision making has been impressive. When the pass hasn't been on, he's recognised running opportunities. When the corners play up and tight, he hasn't hung the ball out, but instead, has delicately lobbed it to the sideline where only the receiver could pluck it from its trajectory. His longer throws, too, have been dazzling to the eye, torpedoing over the wreckage of linemen and defensive backs below, and then finally, softly, descending into the outstretched arms of delighted Panthers, like the all but forgotten Steve Smith. The second quarter lob to Smith versus the Cardinals was particularly elegant, prefaced by a subtle ball fake to the left, then a sailing, spiralling ball arced across the horizon, eventually swooping toward its six-point finale. If it was the Olympics it would have earned a perfect score.

What else does Newton do? Well, he scrambles, he dives fearlessly for first downs, he works the play action with the pizazz of a Spanish bullfighter. He's agile in the pocket, aware and energetic, eyes down field, dodging tacklers and fending of charging bulls. But also keeps a cool head, and hand. It's this poise, to wait, adjust and see the game unfold in front of him that is fuelling his success. Heck, he can even make the lunge over helmets and pads to score goal line touchdowns, which is not easy with his 250-pound frame.

Newton is an enticing prospect. He has size, dexterity, versatility and a decent arm. At day's end though, it's his leadership that will take his career and this Panthers team far. He oozes style and bravado: from the way he lines up behind center, to the way he celebrates a score. The man wants to be out there, and clearly hungers for victory. Sure, a few passes have gone astray. A couple of runs have come up short. Let's keep things in perspective though: Newton hasn't even played a handful of games.The sky is, at least in this case, truly the limit.

And this is not just what Carolina fans need, it's what the NFL needs: a Namath-cool superstar, thrilling the arena like a football player, not simply a signal-caller.
at September 22, 2011 No comments:

A go, no-go for Houston

Houston's pro football endeavors - both those in powder and steel blue - have seen success, but are mostly forgotten among relentless images of America's Team, the Dallas Cowboys. The Cowboys are glitz and glamour, typified by their starred helmets and tradition for the grandiose. This, of course, continues today in their state-of-the-art football theater. It sure is tough to stand out in the world of Texas football.

Houston football, however, was once about a dynamic quarterback named Moon and a horse-powered runner called Campbell. The club was flashy and exciting, and played in a then, space-aged Astrodome, on a martian-like surface. For more than 35 years the Oilers greased the wheel of football fortune, spending the majority of their time in the win column. Go on and count them: the Oilers were a force, in the early Sixties, in the late Seventies, in the late Eighties and early Nineties. Houston football - even without Super Bowl jewelry - has been, at times, astronomically good.

But of course, so much has changed lately. The sun has long set on the career of Warren Moon, Steve McNair is sadly gone, and Earl Campbell is a businessman in Austin, Texas. The Oilers played their last down in 1997, albeit in Tennessee, before transitioning to their Titanic identity of today. Sometimes change isn't for the best.

For fans back in Texas not enamored with the rodeo ride that is Jerry Jones's Cowboys, the Texans were thankfully born - a club loaded with talent and expectation but perennially short on success. Unlike the old Oilers, it certainly feels like the Texans are always mired in the mediocrity of 8 - 8 seasons. Last season was even worse at 6-10. The oil well, if you will, is bone dry. But true to form, the Texans are hyped as a winner again in 2011, hoping to finally conquer the AFC south, with the Indianapolis Colts suddenly lame.

These Texans are not afraid to run, harking back to the glorious trade plied by Earl Campbell. They have a new stable, led by offensive thoroughbreds Andre Johnson and Arian Foster, but also a worthy yearling  in Ben Tate, who last week ripped apart the hapless Colts for 116 yards and a touchdown in Week 1. Then there's Matt Schaub who throws the ball more than most, and for large chunks. All combined, the modern Houston attack is high octane.

But to succeed, the steel blue version of this city's football outfit will need to do more than churn up yards and post copious amounts of points. The Colts are Manning-less, so last week's scoring parade could dangerously inflate Houston's ego going forward. The highly touted Schaub is indeed prolific, but he's also lumbering and not always accurate. When facing opponents with dedicated pass rushers like the energetic Dolphins, menacing Raiders and furious Ravens, he'll need to release the ball faster and certainly with more precision for this team to overcome its averages.
at September 17, 2011 No comments: 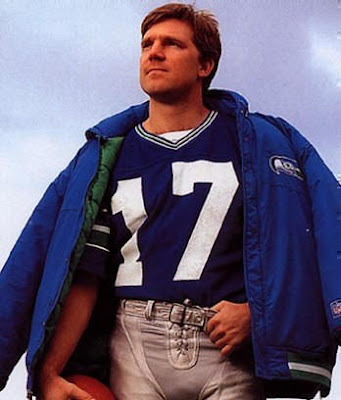 Being a pro football quarterback is like being a Hollywood movie star: you're always in the limelight, you're only as good as your last performance, and the analysis of your career is unfairly based upon perception more than fact.

The first two trends are common in many industries, especially since intranet news morphed into a 24-hour machine of scrutiny. So they might never change. But the third point is more applicable to NFL quarterbacks than even politicians, which is disconcerting given that so much evidence is available these days to refute any false perceptions.

But alas, it was the perception of Cam Newton as a natural leader that had him selected No.1 overall in the 2011 draft, regardless of the fact he is short on passing accuracy, has limited ability in reading coverages, or possess inconsistent mechanics. It was similarly perception that saw Brady Quinn's muscles and matinee idol looks touted as the type of qualities that could rescue a floundering Cleveland ball club in 2007. Brady's now in Denver, as you know. And a very misguided perception, too, has allowed Tavaris Jackson to make a living as a starting quarterback, despite the fact he has completed just 58 per cent of his career passes and thrown almost as many interceptions as he has touchdowns.

Are there really so few talented quarterbacks that we need to create hype around players that wouldn't get a run on Goldie Hawn's Wildcats? Or are we simply being spun too many stories by a rampant online rumor mill that's clouding our judgement?

Lately, it feels like there are less elite quarterbacks in pro football and a laundry list of "projects". This is either a strange point in time along the quarterback time continuum, or there's been a deliberate veering away from experience behind centrer.

In the Eighties, we were certainly spoiled by Elway, Marino and Montana, but it also felt like their contemporaries were equally competitive. As such, even the NFL’s worst quarterbacks, the Average Joes, were once stars. On any given Sunday, on any given team, you’d see a guy barking plays whom you trusted, looked up to, and rooted for the previous week – no matter his numbers. The quarterback was the leader, more than the athlete.

At least that's how I remember it.

Unfortunately, somewhere between Steve Young displacing No. 16 and Madden '03, the QB role morphed. Suddenly, perception took on greater importance and hype could seal you a record contract. Good for some, not so much for the rest of us.

Look, I realize many of yesteryear’s QBs lacked a rifle arm, had questionable footwork, and struggled to fill out their jerseys. They often threw more picks than touchdowns and tossed as many wounded ducks as frozen ropes. Their quarterback ratings weren't even worth rating. Guys like Dave Krieg, Bobby Hebert, Neil Lomax, Steve Grogan, Jim Everett and Ken O’Brien probably didn’t make as many plays as I remember. But still, these men had the requisite John Wayne gait, Mellencamp mop, and enough confidence to overcome a leaky offensive line. Average Joe owned the huddle with as much gumption as Joe Cool. And that's all we cared about - quarterback ratings be damned.

At least that’s how I remember it.

Today’s NFL prefers potential over personality, cannons over catapults, and statistics over leaders. Mark Sanchez's playoff win "line" is certainly proof of the power of spin. GQ shoots are the new currency folks - there’s no longer a place for extraordinary feats by simple men. In fact, you only have to glance down the list of starters for 2011 to see that there are three kinds of signal-callers right now: the elite, qualified by their numbers; the middle tier, qualified by ups and downs; and then the prospects, qualified mostly by their potential. And the drop off after those five or six elites is alarming.

In the end, I can’t help but think there was consistency to all those old quarterbacks. A persistence. They were just always there – starting. It was their names – not the name of some multi-millionaire rookie hovering over their shoulder – that always flashed up onscreen in those budget yellow titles. They labored through three-win seasons, took the hits to their much smaller cardboard cut-out bodies. And yet, they always bounced back up. These warriors may not have been franchise quarterbacks as we consider them today, but media and fans alike rarely screamed for their heads with the same ferocity that they do today.

It might just be nostalgia, but I miss that quarterbacks were once stars by virtue of hours clocked, not pre-draft hype. They were classically skilled but not powerful. Confident, yet grizzled. A little rough around the edges with a noodle arm and flat ass. Kurt Warner fit that mold, which is why he seemed such an oddity in the current era.

But once upon a time, every team had their Kurt Warner, didn’t they? Average or not, short or stout, he started and usually finished. He just played football, come sleet or snow. And that’s why he always seemed so heroic.