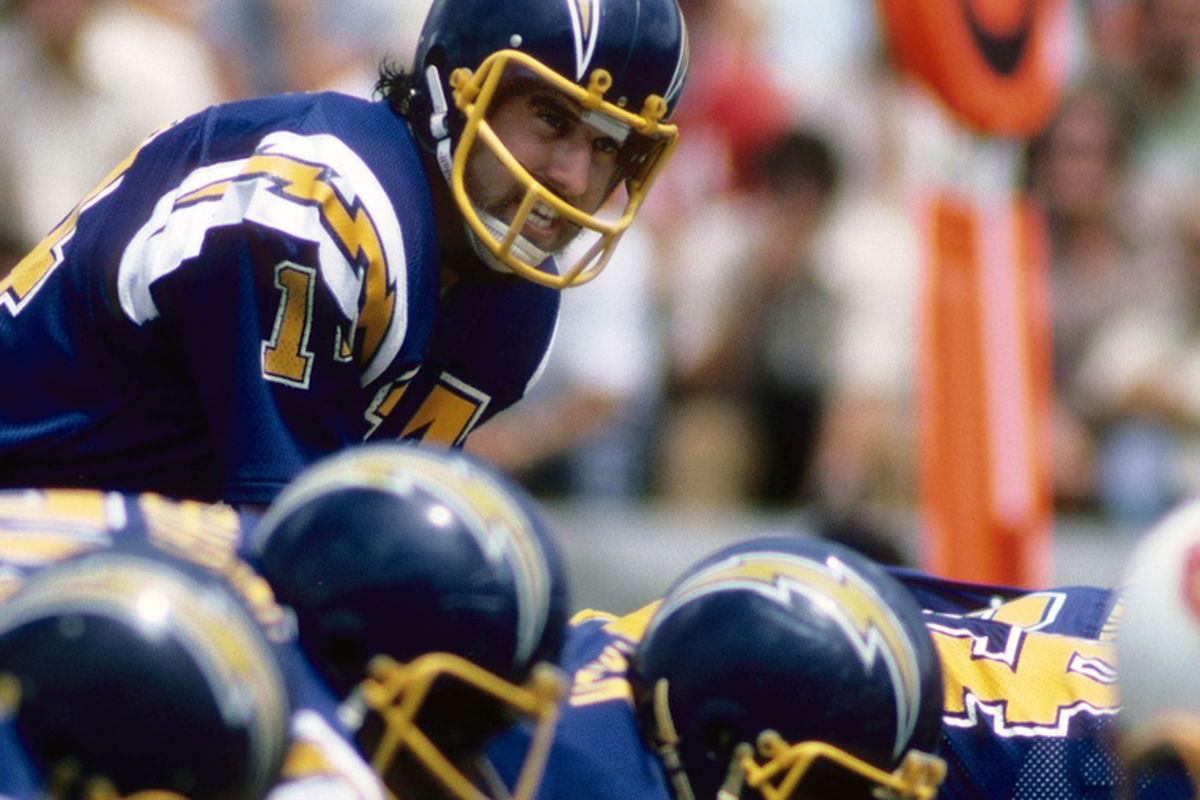 When I was nine, a buddy of mine brought a Chargers jersey to school for art class. I have no idea where he got it but I assumed it was on a Griswold-style family trip to California.

Why exactly did he need a jersey for art, though? Did he see the whole thing as sport? Was he Dan Fouts super-fan?

Well, each of us were asked to bring in a painting smock and unlike the rest of the class, resplendent in a khaki aprons from Target (or wherever one bought such things) my pal decided that his oversized jersey would offer the perfect defense against loosely splattered paint. He wasn't wrong - his garment was more imposing than Boltman on the beer line. And the dark blue of the then San Diego club would surely disguise most of the potential paint splotches, too.

To that end, sometimes I think Phil Rivers wouldn't mind disguising himself in another colour. I mean has there ever been a better quarterback for a club with more last quarter fiascos? The Chargers typically look unbeatable for 45 minutes of football, before something takes hold, a sort of reverse bolt of energy. A negative charge, if you will. Maybe it's a change of scene he needs to win.

The trouble is nobody wants to see Rivers in another jersey, do they? He's probably got a couple of good seasons left, and I for one don't want the blue memories blotched with red, green, or tiger stripes.

No, Rivers' red faced and rile up in the huddle just wouldn't work without bolts marking his shoulder pads. Here's hoping he strikes some genuine success in Los Angeles. And not just because all the prognosticators have called it, but because Rivers runs an offense better than most, and because however many Charger fans remain deserve to paint the town red ... or blue, as it were.
at September 16, 2018 1 comment:

Browns should turn to old tricks

When you think of Browns football, what comes to mind?

The Browns were at their best when they ran. And when that running was done by Jim Brown, the NFL was at its best. Consider that in Brown's first four years, the season was just 12 games, while in his last five it was just 14 games. And yet, in that time he averaged 1,368 yards per season, which is incredible. During his stellar career, the club reached the championship game three times, in 1957,'64 and 65.

So maybe, with a new star quarterback under center in Cleveland, it's time for the Browns to call an audible, and, you know, to get to back to basics. Run!

It's an old adage in football that the passing game is improved by the run. And yet, without a sufficient running attack, some teams default to constant passing. It stands to reason that more passing reps, can only make your passing game better, right? And perhaps that while a run-centric game opens up the passing lanes for a quarterback, fewer passes means fewer reps.

So what's the best approach for a young quarterback like Mayfield?

As Baker explains it, the run gives receivers more one-on-one chances, presumably because there's reduced focus on them in a run-heavy attack. This makes sense but I wonder if that means there's greater pressure on a quarterback to connect on those intermittent balls? Or are they so much easier to make that no matter how meager your run game, the throwing windows become much wider.

"Any time you can run the ball it sets up your throwing. That’s the attitude we want to have and also, with our division, you’ve got to be able to run the ball when they know you’re running it. So being able to do that and set up play-action. But it also gives our receivers one-on-one chances to make plays against one-on-one coverage. So if we keep running the ball, we’ll progress in the passing game."

Now the Browns have a good back in Carlos Hyde, but they also have a running QB - Tyrod Taylor. There's plenty of opportunity for this new version of the Dogs to try some old tricks.