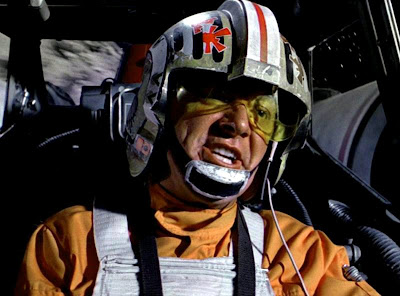 As we close in on the first NFL kick-off like the rebels toward the Death Star, we contemplate our collective new hopes.

Above all else, that means proper football---throws with zip and tackles with venom! We want quarterbacks with pedigree, not cheap competitions between third-stringers. And we want coaches throwing clipboards, not patting guys on the rear for trying.

So we know Mark Sanchez hasn't improved much. But Tebow hasn't improved at all. The Jets know what they have and that's two QBs who at least bring the ladies through the gate. Congratulations Woody.

But if you thought the Jets were loosing altitude, how about the low-flying Cardinals? They went all in with Kevin Kolb, and Kolb went all in on looking like Betty White. Now it looks like John Skelton's job, and that's more upsetting than catapulting your family truckster across the Arizona desert.

If only the Cards could generate that sort of tally.

We’ve also rediscovered that Michael Vick throws out more limbs than out routes. His fragility could undermine a championship-caliber squad in Philly. Brace yourself for plenty of Andy Reid post-game apologies, and surely a few Sunday night cheesesteaks.

Then there’s the Raiders, whose speedy receivers could rattle Usain Bolt. But not opposing corners. No sir. That’s because Carson Palmer seems to be regressing in his twilight. Maybe it’s Leinart Time? Let's not lose our heads.

How about Adrian Peterson? The guy busts a knee so badly the thought of him turning on it again makes you wince. And yet he’s ready for Week 1. It’s an impossibility. A freakish comeback. Supernatural! Here’s hoping AP is more sturdy than the Metrodome roof.

By contrast, any time Brady is on his rump...well, maybe not if you're a Pats fan. The New England o-line is a worry, not just for the state of the attack but Brady’s psyche, which can loosen like a New England apple cobbler when he's bumped. Okay fine. He's still---still!---the benchmark.

Did you hear Peyton Manning’s neck is playing QB for the Broncos now? Yep, it’s received more reviews than the greatest signal-caller of the last decade himself. In truth, Peyton looks good, and it’ll be a joy to see him tossing TDs again. Especially when The Neck faces off against his rival at Gillette in Week 5.

Remember the Titans? They should be a playoff team with the weapons they stash. And yet, quarterback is never a lock with these people, because Hasselbeck has some rust, and Locker is shiny and new. Neither one appears to have the mettle.

Just as rain and winds hit Florida, some hard knocking drama brewed in the Dolphins locker room. Rookies starting, veterans cut, egos wounded, and a proposed logo change in the works. It all smacks of a rebuilding phase. At least the cheerleading squad remains formidable.

The Cowboys wideout Dez Bryant had 63 catches and nine touchdowns last season. This season he's already scored Jerry Jones's so-called rules and a curfew. Should be a smokin' season in the Big D.

And finally, the New York Giants, the reigning Super Bowl champs no less, are being picked as the second best team in the NFC East. Either the experts like taking a beating or this is their perverse way of motivating the Big Blue defense. Thank you experts.

It's just the preseason Kevin, relax 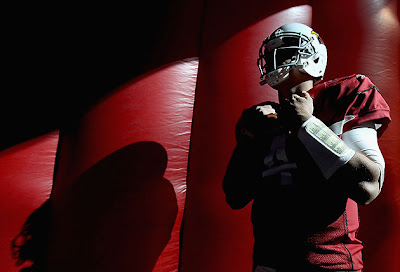 Let's remember it's the preseason. That's what they like to tell us. But it's hard to excuse "unofficial" interceptions and flat-out ineptitude, isn't it?

Take the Titans' Jake Locker, who threw wildly and off-balance against the Bucs Friday. He darted up field in the end, because overthrows and misguided decisions just weren't cutting it. Funny that. Locker was 4 of 11 for just 21 yards on the day. Thank goodness for Chris Johnson.

How about the much maligned Kevin Kolb, who looked nervous on the sideline, petrified in the pocket, and demoralized by the time he'd logged his minutes against the Raiders. Is it safe to say the Kolb era is over in Arizona? Oh, Kevin. We thought it was just the preseason, too.

Then there's those Hard Knocking quarterbacks of Miami, Ryan Tannehill and Matt Moore, oh, and the suddenly bed-ridden David Garrard who still might start after Friday's dire display. It's a competition, they tell us, but we know better.

The truth is, Matt Moore, after his stellar second-half last season, deserves the starting job---not a competition. He not only gave the team stability en route to a 6-3 finale, but injected some life into the offense. The receivers finally had someone noticing them down field. It was a breath of fresh air in the humid confines of South Beach.

But in the NFL, the grass is always greener on the other side. Right now, Moore is off the grass and into the swamp. Tannehill is new and shiny, and has a beautiful young wife. He's hungry and untainted, slinging it and winging it. This means everything in pro football. Forget that he has very little experience or isn't seeing beyond the first read. Tannehill, in the eyes of both fans and media, is the starter.

The word out of Napa, other than that the Valley’s 2009 Cabernets are now drinkable, is that Darren McFadden is tearing by defenders in training camp – just like you remember him doing.

If it seems a while since we’ve seen No.20, that’s because it has been. He missed the last nine games of the 2011 season with a foot sprain equivalent to a cracked axle. That’s the sort of problem you can’t simply rev through, hoping to get to Wendy's before grinding to a painful stop. No, that's at least a few days taking the bus folks, mustard down the shirt with every pothole.

But through the first six games of last season, McFadden led the NFL with 600 yards rushing, and had five touchdowns. Those are the beginnings of MVP numbers. It’s the endings that are undermining it all.

In recent seasons McFadden has led the pros in yards per carry with more than five a pop, but because he’s not always on the field, he's never earned as many Chris Berman mentions as he deserves. And you know Boomer likes to showcase his gravelly Ralph Kramden-sounding Raaaiiiiideeers impression whenever possible. McFadden needs to feed the beast!

Surely the issue is the way he runs – hard, and with perpetual pace. He’s the type of rusher that sees space and punches the gas, blasting into daylight like Andretti for the checkered flag. McFadden has Olympic technique – the sort of form that makes you recall sprinter Michael Johnson - upright, pumping and purposeful. Like Super Mario. But just as with Nintendo's highest profile plumber, it's also an approach that requires space---and generally few hammer-throwing turtles---to succeed.

Raiders quarterback Carson Palmer recently called the back “unreal” and “explosive”. His speed is unreal. But the explosiveness, that rapid early motion, is perhaps affecting his longevity. It might be just what tweaks the knee, or jabs the toe, or cracks the axle. Or maybe it’s just bad luck. And yet – and I only say this because I want to see a full 16 games of McFadden – he needs to be more selective on his runs. When he hits the gaps, there’s a silver and black blur nobody's catching. Once he enters the pit of monsters awaiting him at that second level, however, McFadden can take a beating, as all marked men do.

Sometimes, the hard runner needs to be smarter.

The Raiders can help counter the battering by giving McFadden enough spells on the sideline, but also by using him more out wide, where he’s proven to be an exceptional receiver and runner after the catch (over four seasons he's averaged no less than eight yards per reception). While the Adrian Petersons churn across the gridiron, over and through people, all power and grimace, McFadden blazes like a Ferrari. And a Ferrari is best on the freeway, not ricocheting into Buicks.

There’s plenty of tread on those tires, but it’s no good if the car’s always in the shop.

Infographics are in seemingly more places now than Terrell Owens. But unlike TO, they're not going to unsettle your favourite quarterback, or disrupt the inner workings of your team. They're simply colorful and informative...like John Madden.

So we're pleased to bring you our first ever football infographic, courtesy of our new friends over at The Football Educator. This one is about training camp, and interestingly represents the amount of Gatorade consumed, or at least made available for consumption---twenty-five cases! (Note: we can't confirm how much of the Jets' 25 were solely consumed by Rex Ryan but hope an infographic is in the offing).