The Titans emerge - incredibly - as a threat 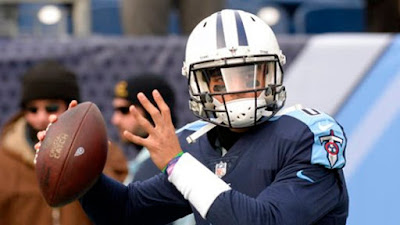 Titans quarterback Marcus Mariota is either the luckiest football player in the world or a super genius. No wait - he's something else. Maybe he's a Jedi. Anyone who wears a visor like that might just have Vader-like qualities.

With the Titans third and goal against the Chiefs last week, Mariota spied a gap and threw the ball toward the endzone, in what should have resulted in a dead play. But no, some manner of hocus pocus intervened. The misfired pass was batted back toward Mariota by a Chiefs defender and, as ones does, he caught his own deflection before diving toward the corner for a touchdown.

What manner of gadgetry is this? Stuff like this only ever happens on the Nintendo field and even then it's usually via a slip of a Dorito-greased thumb.

Mariota said after the game that it was just the 'right place, right time,' but I think we know better. All year long this guy's has been borderline mediocre, fooling fans and gamblers alike with his size and athleticism. One minute he's on, the next it's moon pies back in the cupboard kids. There's just no trusting this squad.

Well, the knives - or swords - are out folks. The Titans are scary. As their sinking ship was set to turn over on its side, Mariota rallied them back and then, finally, somehow, willed a 22-yard strike to Eric Decker with six minutes left to seal victory.

It was so improbable that one can only conclude Mariota has indeed been playing possum, simply biding his time to learn the ways of his footballing force. The guy might be the next coming of Steve Young for all we know.