Lechler's punt on the Texans and the Raiders silver lining 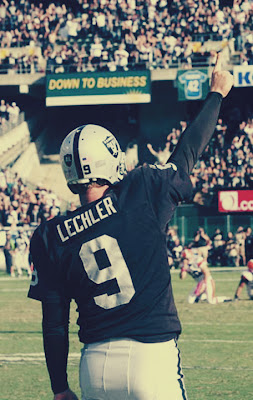 The NFL's best punter, Shane Lechler, has signed with the Houston Texans after 13 seasons with the Oakland Raiders, and fans in the Bay Area are surely kicking themselves.

Oakland won't be short of people swinging their boots, if that's what you were thinking.

Lechler signed a three-year $5.5 million deal with the Texans, significantly lower than what the late Al Davis was willing to pay him---a record punting fee of $16 million for four years back in 2008. But economies have since collapsed, Twinkies have faced extinction, and Justin Timberlake does everything now except run the Vatican. Times have changed.

Despite the fact he's only 36, and plans to play 20 seasons in all (which would mean seven more), the Raiders are clearly not seeing Lechler in the same light. Assuming they are wearing their eye patches over the correct eye, it may be because the punter's net yards were slightly down last season.

Net yards seem very important to NFL teams, even though the punter has no real control over that statistic---not unless he's sprinting down field after scratching his nose with the toe of his cleat, and wrestling the punt returner into the grass himself. I'm not sure that even Usain Bolt could achieve such a feat, though wouldn't be surprised if a pro football team similarly forked out $16 million for the service.

Lechler netted 39 yards per punt last season, lower than his career average of about 41. This type of discrepancy causes more panic in pro football clubhouses than warm Gatorade. But he has booted 47 yards per punt over his career, not including the adjustment of returns or penalties. This should count for, well, everything, because it relates to the actual distance of his kicks.

Lechler has also admitted that he rushed back from a knee injury last season, and that it took him a month to be back on his game. "During the second half of the season, I felt like I was back to my old self," he told reporters in Houston recently.

Of course, there are many other aspects that factor into punting, and the associated squad that charges towards the man returning, such as the amount of time the ball hangs in the air. Lechler has been consistent on all of these fronts for many years, which is why so many people regard him as the best punter ever. You only need to scan his career stats to realize this. For example, Lechler kicked for 4,503 yards for an average of 47 yards per punt in 2003. His net average per punt that season was just 37 yards. That particular campaign, the Raiders won just four games, and were obliterated on the road (0-8). Not surprisingly then, returners tallied 699 yards on Lechler's 2003 punt total.

Last season, Lechler punted for 3,826 yards all up, with returners only logging 450 yards. So while he punted for fewer yards, they were likely more effective kicks with a better net average per punt than during the monster year, nine seasons earlier. So, I'm not certain I see the Raiders logic here in letting Lechler go, because up or down, he's been relatively consistent.

We do know that the Raiders picked up Marquette King in last draft, who supposedly has more leg than Heidi Klum. For Fort Valley State University in 2011, King led his team's conference in punting with a 43 yards per punt average, and 16 of them were for 50 yards or more. And due to a towering 80-yarder once, his legend has preceded his NFL career.

So Oakland and its fan base are no doubt giddy at the prospect of King. But Lechler's shoes are mighty ones to fill, especially before an intimidating audience of pirates, ghouls and skeleton bikers.

Tebow could jet down to Florida 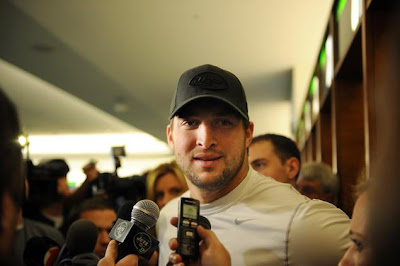 Tim Tebow might actually be a better quarterback option for the New York Jets than Mark Sanchez. He's bigger, is a more powerful runner, and at this stage, may actually be more accurate.

But the Jets probably have other plans, like signing a sixth QB, selling their best player, Darrelle Revis, and generally alienating their fan base. Just another offseason in New York.

This all leaves Tebow---if the Jets aren't clever enough to devise some running packages for him---in limbo. The former Florida Gator will then seek another path to the NFL stardom, and as it turns out, the Arena Football League may have a timely opportunity.

Orlando Predators owner Brett Bouchy told the Orlando Sentinel, in no uncertain terms, that his club is in the hunt for a piece of Tebow magic. That's right---mass marketing magic.

"Tim would certainly want to first exhaust his opportunities in the NFL, but we'd love to have him," Bouchy told the Sentinel. "I think he would definitely improve as a quarterback in our league.

"Kurt Warner told me once that when he got back to the NFL after playing in the Arena League, the NFL game was like slow motion. Everything in the Arena League is just so much faster and quicker and predicated on accuracy. Whenever Tim is willing, we have a contract waiting for him to sign."

You have to admire Bouchy's ingenuity, but he does realise Arena football isn't soccer right? Passing with your arms is still required.

And while Kurt Warner was a great NFL passer, I think we can all agree that he saw the game in slow motion because he was in fact playing in slow motion. 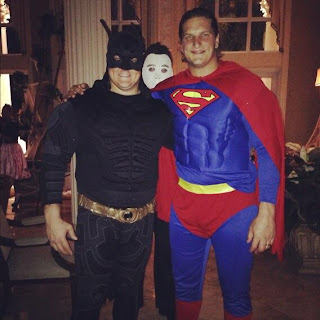 Dolphins left guard Richie Incognito has started a Twitter campaign to keep left tackle Jake Long in Miami. Long's eye has been wondering, you see, and Incognito is hoping a more cognito approach will change his buddy's mind.

Incognito began his digital mission following Long's visit to the Rams and has been at it the last two days. One of his best came at 8.45pm on Saturday night, when he Tweeted something sweet from the Incognito family scrapbook:

Who else will dress up with u on Halloween jake? #nobody #LEFTGUARDLOVE #brotherlylovepic.twitter.com/Y2EehGSffb

It'll be tough for Long to forget such special memories really, the kind only made when two large men are willing to be snapped arm-in-arm in their underpants.

Elvis may have left the building 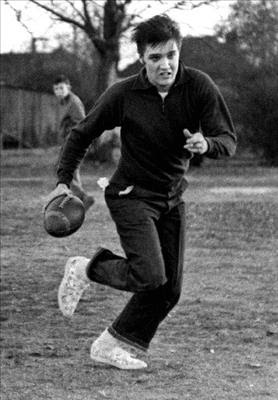 Thank you, thank you very much.

Dumervil has decided to take a pay cut after some rubberneckin', according to the latest news out of Denver, but his newly signed contract didn't hit Bronco HQ until seven minutes after the free agency deadline.

The Broncos can still sign Dumervil, but not without some salary cap fever. And perhaps worse, other teams also have the chance to entice the king of rushing, meaning Denver truly got stung.

This mess of blues needn't have happened if Dumervil's agent, presumably the Colonel, had worked out how to use his fax machine in under 35 minutes. Lawdy Miss Clawdy!

Still, the Broncos can reach the promised land without Dumervil, but would surely rather have the defensive end's 11 sacks or so, not to mention his presence, which is not the type of thing that's measured on the stats sheet.

There's certainly some suspicion over this whole ordeal, however, and questions about Dumervil's intention to stick with Denver. Young dreams have a way of shifting a situation, don't they?

Just as well fans have wooden hearts in this age where players believe anyplace is paradise, as long there's money---always enough to prompt two parties to go their separate ways.
at March 15, 2013 No comments: