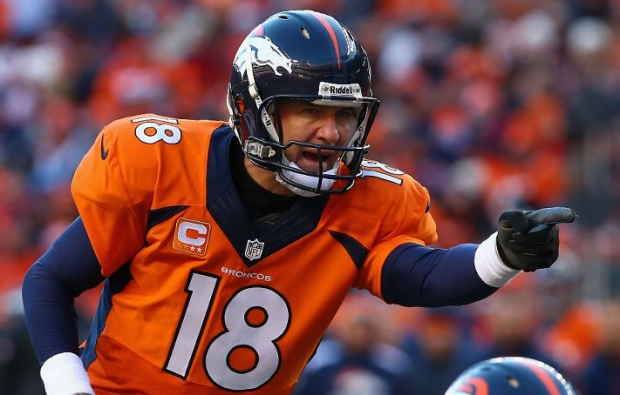 The big wigs over at Broncos HQ are said to have concerns ahead of the Super Bowl because Peyton Manning's "Omaha! Omaha!" signal call has become too obvious.

In light of this, they've come up with 10 new audibles for Manning to use at the line against the Seattle Seahawks.

NFL Cool Rankings: The Quest For The Holy Grail

With only four teams left to pursue the Super Bowl’s Holy Grail, it remains to be seen who escapes the series of traps left within the playoff temple. The path to the Vince Lombardi Trophy can be a treacherous one to be sure, especially with that old knight Walt Coleman patrolling the sidelines.

“Only the penitent man shall pass!” he cries.

But are there such men in this year’s crop of quarterback heroes?

First, there's Brady, who is unforgiving. Then Manning, who seems more like an everyman. How about the two young guns, Kaepernick and Wilson, who both strut the park with more bravado than prized poodles at Westminster?

Indeed, there’s no room for internalizing in the modern game. Strut! Stride! Charge! Or be charged. Run, or be roughhoused. Or rocked. That's why the older guys get rid it of it so quickly, you see.

Truth is, time is also running out. For Brady and Manning, this may be the last hurrah. For Wilson and Kaepernick it might be just the start of many blue ribbons. They're the future, or so everybody is telling us.

Whether you side with these players, and their teams, may ultimately be framed by their cultural impact (hashtag - leaping onto a cool bandwagon).

So for the indecisive and uninitiated, here’s a quick guide to the coolness levels of the four remaining contenders.

The Hawks are the hottest team in cool colors since the Blue Man Group. They’re still hot, right?

Anyway, you can’t help but like Wilson. He’s so slick. So fast. So cool. And can throw. Plus, his post-game comments are the stuff of, I don't know, a senator. A good senator, one without a lascivious past. He makes you believe.

Then there’s that animal Beast Mode – a.k.a. Marshawn Lynch. Man he’s scary. He looks like the Predator, for crying out loud.

So, if don’t have a horse in this race and need one, it’s hard to look past the suddenly favorited ringless underdog.

The Broncos defense is menacing. That’s what football fans say. The uniform is rich. That’s what fashionistas say. The air is rarified. That's what the media says. The old 'D' logo was once impenetrable and therefore legendary. That’s what I say.

Speaking of legends, how about Peyton Manning? They don’t come much bigger. Or better. Or humbler. He seems like a great guy. A man who studies the game more earnestly than that nerdy dude in your fantasy league who's so very pedantic on trades. What gives with that? I just need another receiver, guy. Pull the trigger.

Anyway, if you believe in miracles - and Peyton winning at age 37 post serious injury is one - Denver should be your team.

Look, even as a neutral observer I’m finding it tough to recommend the Pats. They’re just too dynastic. Too conniving. I mean Belichick and Brady are the Gargamel and Azrael of the NFL, aren't they? Everyone else are Smurfs, scurrying for survival. And you know who Vanity is right….?

Yes, Colin Kaepernick loves to kiss his arms. Give the man a mirror and put a flower in his hat! I’m sorry but....yes he can run. Great. He sometimes even throws it well. Other times, when he's not congratulating himself, he does the two simultaneously, like a tattooed cyborg that’s short-circuiting. In fact, I’m convinced Jim Harbaugh built Kaepernick in his basement as part of an elaborate plan to unseat Alex Smith, win a Super Bowl, and more importantly, the hearts and minds of every Gen Y fan out there. 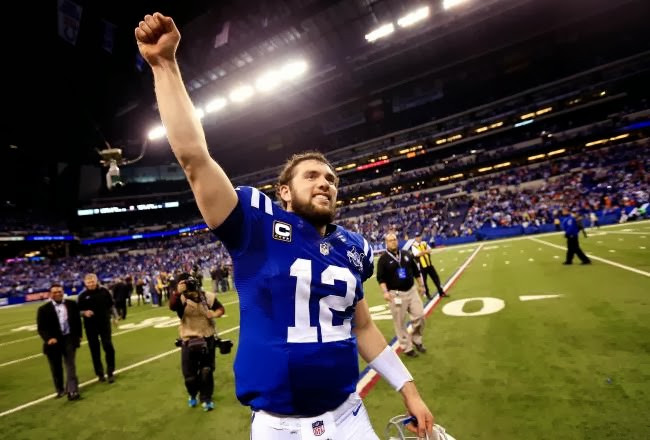 1. Andy Dalton can throw one heck of a deep ball. It's the short to mid range stuff that turns him into Gus Frerotte.

2. Sean Payton somehow makes a visor look credible in the freezing cold. Can you imagine what he'd do with a sombrero?

3. Drew Brees can launch some shockingly conceived balls, but rest assured he'll always be excused by the talking heads.

4. Philly's Riley Cooper mistook a pair of dishwashing gloves for his receiving mittens against the Saints. Apparently.

5. Colts general manager Ryan Grigson likened Andrew Luck to Michael Jordan because he wants the ball. But that scoop and score play was really the stuff of Magic.

6. It's funny how players that do dumb things like Cary Williams horse-collar tackle on Darren Sproles can look so proud of such a careless mistake.

7. Colin Kaepernick is really good at running. Yes folks, he's like a gazelle! Spotting wide open receivers is proving more challenging however.
at January 07, 2014 No comments: