The Jets know what they're doing, okay? 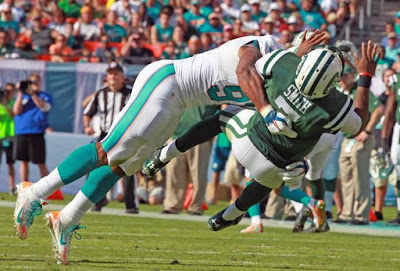 The New York Jets have ensured that their long held strategy of fielding an inadequate starting quarterback remains in place, by neglecting to sign anyone of talent at the position for the 2015 season.

Jets brass confirmed this past month that the wildly inaccurate and remarkably illogical, Geno Smith, will continue to hold the club's starting QB job and that it is - amazingly - his to lose. New Yorkers, perhaps indifferent to the situation after watching Jets quarterbacks perform the role with all the ineptitude of Peanuts' Charlie Brown, must thank their lucky stars that their city has two football teams.

This, of course, is little consolation for those who bleed Jets green and not Giants blue. Instead, these fans must do all they can to sedate themselves amid the lunacy exhibited by their team's management, who clearly hold the sport's premiere position in such low regard. How else can one explain the club's signing of journeyman Ryan Fitzpatrick, a notably more intelligent signal-caller than Smith, and equally evasive in the open field, only to relegate him to the back-up role?

Fitzpatrick isn't a Manning, it should go without saying, but he's also no Mark Sanchez. The problem, it seems, is that he's somewhere in between and for the Jets, this poses a confounding situation: Should they play Smith and guarantee themselves perhaps four wins, or run with Fitzpatrick and aim for eight, maybe nine?

The former is a more familiar goal, and as suggested, within the club's existing mode of operation. The latter, meanwhile, bears potential, and that's never been the Jets' strong suit. They prefer tallying up picks and turnovers, you see. We all work better with what we know, right?
at June 14, 2015 No comments: