3a. If 25-minute quarters are voted down, push for play during half-time

3b. In lieu of any extended play, add Wednesday Night Football to schedule

4. Remove kick-offs and replace with "pick a hand" or three-card monte

5. Provide all quarterbacks with a medieval shield 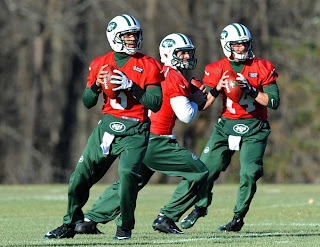 Everybody hates Mark Sanchez. Or at least it feels that way. How does a player with such prospect, such athleticism, and such a well-trimmed beard fall out of favor so quickly? Well, it’s nothing a few interceptions, a 25-point ESPN quarterback rating, and ties to distracting women couldn’t fix. Sure, he’s had chances, and maybe he wasn’t that good to begin with. But big city peanut galleries have a knack for viciously turning on their stars, pelting them with handfuls of Planters and then pulling the bag over their heads. (One flawed high note and it all unravels for Nathan Lane).
Whatever you think of Sanchez’s 13 of 28 pass completions and four picks against the Titans, or 10 of 21 for three interceptions versus the woeful Cardinals, everybody deserves some Christmas cheer, right?
So if you’ve been stuck for gift ideas like we have, below are some last-minute suggestions for the Jets’ beleaguered No.6.
Merry Christmas Sanchize.
Sanchez Gift Ideas:
McAfee antivirus computer package, for likely sabotage by fuming New Yorkers.
Lazy Boy recliner for Mark to relax during his prolonged sideline secondment.
Magic 8 Ball – let’s face it, nobody else will give it to him straight.
Voucher for Lasik corrective eye surgery, regardless of Sanchez’s current quality of vision.
A bag of pre-autographed ‘Mark Sanchez’ balls—to boost the poor guy’s confidence.
Nivea grooming products. Sure, predictable, but really thoughtful considering he now has the time focus on manscaping.
Suction cap gloves. Because velcro might not be enough in his case.
Banana Republic cardigan. He may as well look good while being fired.
Framed picture of the three Jets QBs in training camp, with engraved caption, “Fun Times”.
A Joe Namath jersey to avoid all booing the remainder of the season.

Russell Wilson for President, and 5 other new slogans 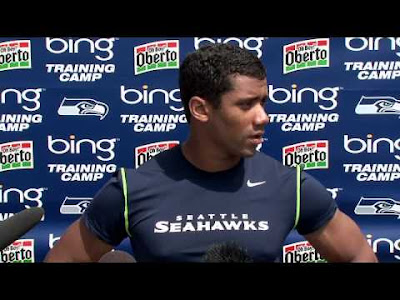 Like Super Mario after collecting the flower, Seahawks quarterbacking hero, Russell Wilson, packs quite a punch for a little guy. It could be argued, in fact, that Wilson always plays fiery, shooting spinning flames from his scolding hand as if Bowser is charging in on every down. And when he's not throwing, he's speeding by obstacles, zipping around hard-shelled opponents and into perilous gaps. He's a fearless competitor who knows how to pipeline the points for his squad.

After lobbing two touchdowns and 293 yards in a comeback win against the Bears, then orchestrating the 58-0 drubbing of the Cardinals, Wilson propelled himself to "super" status---a level only a handful of QBs have attained this season. As Seattle P-I reported, he's on pace for 25 touchdowns this campaign (on 19 as of Week 14).

And so, here at Why Football Is Cool, we're marking the Hawks' sea-change with slogan ideas for the team's 2013-14 ad campaign, inspired by Seattle's superb signal-caller.

Feeling Rusty? He's got the pill.

Russell Wilson: Not only in like Flynn, in for Flynn.

Wilson for President. Another Fourteen Points, just like that.

Adrian Peterson is invincible, or is he? 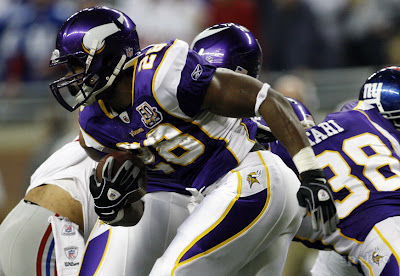 If there was ever an athlete who resembles Superman, or the Flash, or even the sheer brutality of the Caped Crusader, it's Adrian Peterson. Given his steel frame, brilliant speed, and ferocious charge, he might be all three in one.

Like Walter Payton, Jim Brown, and Earl Campbell before him, Petersen just refuses to go down. The thighs churn, the arms pump, and the head lowers like Man-At-Arms (that one's for you Masters of the Universe fans out there). Nobody's stopping Man-At-Arms, not even that weasel Skeletor.

Just 12 months removed from a busted knee, AP has somehow run in excess of 1,400 yards this season, averaging a ludicrous 6 yards per carry. That sort of clip will fog up Eric Dickerson's goggles. Yes, Eric, your 1984 single season rushing record of 2,105 yards is in jeopardy, as National Football Post breaks down. 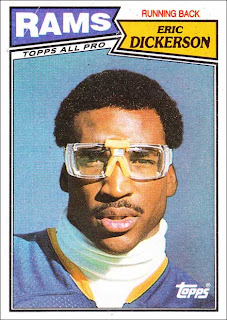 So the question is how do you stop a superhuman? How do you subdue a force that scorches the earth like a cheetah, and cuts with the dexterity of a mongoose? And, furthermore, what does he use to get those grass stains out? Amazing.

Rant Sports suggests clock management on defense is key, at least for the Bears.

Bleacher Report says pressure the QB, but focus the defense on the run.

Here are some other ideas: 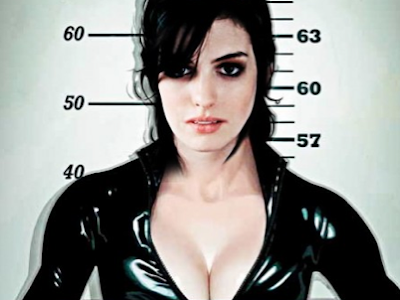 RG3 and the complete Redskins arsenal 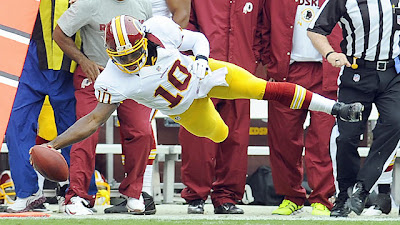 Everybody’s talking about the Redskins' Pistol offense like it’s the silver bullet for all attacking woes. Maybe it is. But let’s not kid ourselves---most NFL teams don’t have a quarterback who can run three yards, let alone the read-option style RG3 has made his own.

In the event league copycats defy common sense---and clubs like the Texans cock the Pistol with bulky Matt Schaub, or the Ravens with gangly Joe Flacco---rest assured Washington will be ready with a range of other weapon-monikered approaches.

We list them for the first time here on Why Football Is Cool:

The Cannon: A tailback and vintage WW1 cannon line up on either side of RG3, eight feet from center. Once the ball is snapped, RG3 can fake to his running mate who cuts left, or drop the ball into the mouth of the cannon, light the fuse, and fire downfield 70 yards to an open receiver. The key wrinkle is that RG3 can stuff himself into the cannon like Wile E. Coyote for a more dangerous but spectacular TD attempt, if he chooses.

The Slingshot: A difficult maneuver which, much like the banjo, requires strong fingers and a sense of rhythm. RG3 lines the team up in the I formation. On the snap, he shuffles back two quick steps, where the tailback (standing behind) hooks two fingers into Griffin's pants, on the belt line. He holds, then pirouettes, while simultaneously dragging the QB around in a circle---like a hammer thrower in the Olympics---before spinning him to the flat, where RG3 will either regather his balance and follows blockers downfield, or catapult into the opposition's coaching staff on the sideline. A win-win really.

The Trojan Horse: An excellent goal line play inspired by rugby tactics, in which RG3 runs a play action, but as he withdraws the ball from the stomach of his tailback, hides it under his jersey. Both QB and RB tumble into the o-line clutching at their stomachs. Here’s the fun part: A wide receiver will circle back behind the line of scrimmage to collect the ball dropped by RG3 between his legs. The wideout then continues around the edge, and downfield for the score. Arm-in-arm singing and beer drinking ensue.

The Bow and Arrow: This is absolutely unstoppable---if it's snowing, or foggy. RG3 lines up in the Pistol, so the defense is back on its heels. When the ball is snapped he fakes the hand off to one side, and all three backs quickly adopt the pose of an archer, which suitably mimics a throwing play. The defense can’t tell who's tossing the ball, and holds for a moment, at which time Griffin charges up the middle. This is a trusty third down play, and looks even better if you have a 6’5" Jamaican sprinter in your backfield.

The Grenade: As the name suggests, this is both an explosive play, and one with limited accuracy. There are two receivers either side, and a fullback comes in for extra protection. The ball is hiked to RG3 who spins around, now with his back to the defense. It’s imperative that the fullback levels any incoming rushers. The QB holds for a second, then heaves the ball with one cupped hand over the opposite shoulder, as if tossing a grenade. He should ideally aim for a corner, away from the fray, because this is essentially a short-field Hail Mary. (The play is otherwise known as the Three Hail Marys, due to the incredible blind faith required). 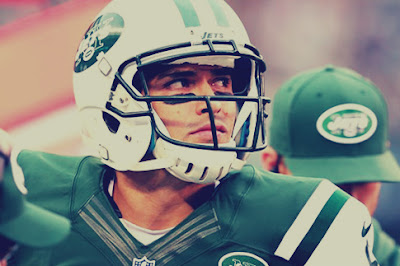 It was a stirring win for the Jets in the Meadowlands Sunday, and all because the team's head coach defied his heart and went with his gut. In hindsight, that Rex Ryan favoring his belly can hardly been viewed as shocking.

But the Ryan-Mark Sanchez bromance was relegated against the Arizona Cardinals because losing to the only NFL team that might be better off without one of its three quarterbacks in the line-up, was surely the impetus New York fans needed to swap the paper bags on their head for air-tight plastic ones. Thankfully, Greg McElroy led the squad to a winning touchdown, and Fireman Ed was not called in to handle a potential crisis.

Needless to say, words have been minced since the Jets 7-6 victory. Feelings have been hurt, and allegiances betrayed. So to help clear the air from inside the Jets locker room---an arduous task after Nick Mangold hits the stalls---we help read between the lines of the post-game.

Said: "It was fun. We were having a good time. It was exciting to get a shot and go in there."

But thought: "I literally wet my pants on the way to the huddle. Luckily I'd had about three liters of Gatorade so it was green, and the guys thought I just spilled some."

Said: "It's tough to kind of gauge the energy. Obviously, I didn't have, like, a decibel meter where I could tell what the crowd noise was."

But thought: "I posted a Facebook photo of me behind center just before the first snap. I wrote, 'About to hike the ball at MetLife. OMG is it loud in here! It must be 130 decibels. Does anyone know how to beat cover 2?'"

Said: "It's just something that I sensed, that I felt. When you're around this game long enough, you get that feeling that, 'You know what? I've seen enough, and it's time to make that change.'"

But thought: "I believed the vest was not only stylish, but thinning. Then one of the cheerleaders pulled me aside and set me straight. She told me vests are for guys like Zac Efron, Roger Federer, and that slimy kid from Gossip Girl. So I made the call---skivvy or bust."

Said: "I'll let you guys know who's going to be the quarterback when I'm ready to."

But thought: "Right now I got a burn from a third-quarter hot dog, so I see your lips moving but the words are like a dull murmur. Anymore questions? Thought not. I'm out."

But thought: "I considered taking a swing. But this is New York. Greg's Irish. A good looking Mexican kid from Long Beach who gets any woman he wants...nobody's ever in that guy's corner."
at December 03, 2012 No comments: