Which quarterback would you want if your starter went down? 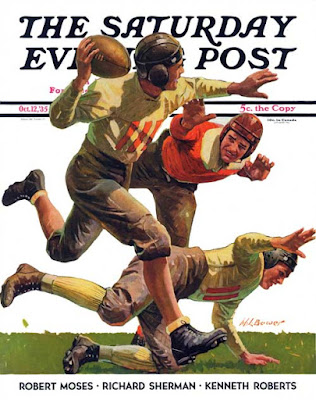 To play our new game, which should have Hasbro knocking at the door any minute now ... you have to imagine a rather zany world order in which pro football contracts are superfluous and players can come and go as they please. (Didn't Brett Favre set this precedent?)

The basic premise is that there must be a QB out there you covet more than a Kardashian home movie. So let's tap into your sub-conscious and talk about it. That's why we're here. If you’re a New York Giants fan, for example, and inextricably tied to Eli, you can, for just a moment, imagine having a quarterback that's less opportunistic, and more reliant on Montana-like accuracy and Elway like-arm strength. Or if you’re a Cardinals fan, maybe you envisage a QB with the ability to play all 16 games and reach the playoffs without a hobble. Imagine that!

Meanwhile, Dolphins fans could conjure a situation in which the Marino Era is a simply a sepcial chapter in Miami’s history book and not persistent nostalgia, impossible to supplant until another QB leads the team back to the AFC Championship Game, or dare we say it, the Super Bowl.

To this end, the below is a shortlist of NFL players we think would be the most coveted of all 32 current starters behind center, should your ace, your big cheese, go down. These players haven't been selected because they're necessarily better than Shane Falco, nor do they boast superior stats (no emails FiveThirtyEight), but because they possess the sorts of intangibles that make having a cool and impossibly professional quarterback the envy of every fan outside of New England, Green Bay, Pittsburgh, Indy and Baltimore.

Sure, you could make arguments for other QBs and other towns being mentioned in that last sentence, but we don’t have the time nor the inclination to complicate this soon-to-be party favorite, which we call Spin the Pigskin. A good game's a quick game, kids.

So who would you choose?*

Matt Ryan – They call him ‘Ice’, which is catchy and perhaps even more applicable when he freezes mid-play. Calm down Falcon fans, we see Matty’s improved movement. What we like here is his level head and ability to lead.

Johnny Manziel – "Let Johnny loose!" the mob cries, while Brian Hoyer devotees sob into their Blackout Stouts. What’s ailed the Browns is a distinct lack of well, quarterbacking, and while Manziel offers no guarantee of addressing this issue, he has bravado. That's right - bravado. You can’t buy it. Oh sure, you can make misguided money gestures, but you won’t be able to finalize a purchase. Not in this town, bub.

Derek Carr – He’s the young buck, the potential savior of Raider Nation, and yet nobody knows if it's all black smoke and silver mirrors at this point. Listen, he’s got guts and seems to be learning fast, so there’s plenty to like.

Cam Newton – Cool Hand Cam, the man with visor and superhero grin. He’s got a cannon that can be loose at times, and all that means is victory is one Hail Mary away.

Russell Wilson – Straight-laced and straightforward, he minimizes errors and runs away from trouble. He’s Tarkenton in the modern era. Smart, confident and frank.

Jay Cutler – Do customers come much cooler than Cutler? Maybe if they’re in a Sears browsing for a new fridge. Otherwise no. The hair, the despondency, the wife. He should be fronting Grizzly Bear not the Chicago Bears.

Phillip Rivers – He’s mad as hell and that’s why you love him. Come on. It’s sunny outside and he’s tossing a football around the park. And yet, instead of dancing around like the always effervescent Buggs, he's more agitated than Yosemite Sam. IT'S PHILLIP! NOT PHIL DAMMIT!

*If your starting QB is on this list then you obviously have fewer choices. That's the game folks - you already have a cool QB so really shouldn't be afforded any advantage.

Why the Rams' LA brand digs in 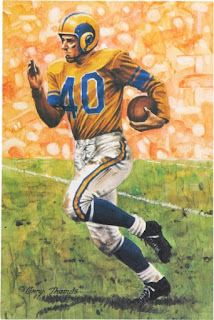 
It wasn’t until 1948 that the Los Angeles Rams football team took on the brand personality it embodies today, albeit in St. Louis, at the time of writing.

We may take dazzling color combinations in sports for granted today, but the Rams' new brand was certainly different for the times: a bright and bold style that exuded a sense of optimism, perhaps in an era short on it.

The original ram horn design was so good, in fact, it endures to this day as one of the more iconic logos in the National Football League. The trademark yellow horns, which seem to sprout from the front of the helmet before curling to the ear, were created by L.A. Rams’ halfback Fred Gherke who studied art at college, according to the Rams official website.

Gherke’s logo design was pioneering because it was the first of its kind in football, which to that point had mostly been played with plain coloured helmets. Pro football's helmet went from leather to plastic in 1951 and the Rams design came into its own--the smooth finish to the synthetic material meaning the yellow and blue coloring could truly pop, as they say.

Gherke was eventually inducted into the Pro Football Hall of Fame, not for his footballing prowess but his helmet design, as The Los Angeles Times wrote in 2002 at the time of his death:

Fred Gehrke, a former Ram halfback who was inducted into the Pro Football Hall of Fame--not for how he carried the ball but for painting horns on his team's leather helmets, touching off a colorful and enduring quest for logos in pro sports--has died. He was 83.