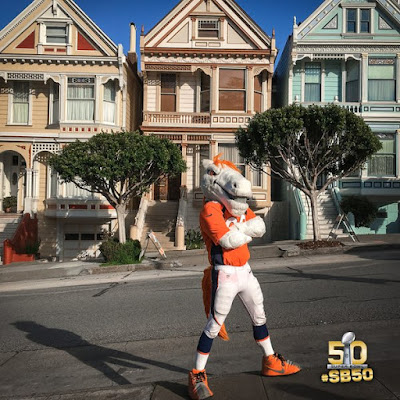 Just @5280Miles at the @fullerhouse house. #NBD from @Broncos

Despite some in the media doubting that Peyton Manning, 39, has much left in the tank for the upcoming Super Bowl, he still has his wonderful height and continues to boast a neat haircut. Should he walk away from the fiftieth iteration of this grand football occasion with only a stiff-brimmed runners-up hat, rest assured he'll wear it proudly - and highly.

Let's not count the Sheriff out altogether, okay. He may look more like Doc Holliday than Wyatt Earp at this stage of his career, but there's one last stand in him. I know it. Manning completed 17 of his 32 passes for 176 yards in the AFC Championship Game, in a steady if not impressive performance, and that's all Broncos fans need. Certainly the ball didn't always spin along a tight line, but it reached its intended target when most needed, right? That's really all that counts in games of such magnitude. While, some commentators are hellbent on telling us that wounded duck throws are catastrophic, we now know this isn't always true. We also know that some commentators are hellbent on hyperbole.

Steadiness is all the Broncos require on the offensive side. And Manning can be an oak for just one more game. Let Cam Newton chase the wind. That's his game. In truth, he'll need multiple plays to square the Broncos defence away.

One play. Two plays. OMAHA! OMAHA! The talking heads also like to say that a game can be decided by one play, and if this is indeed the case, then Manning is also still capable of making that single pass - maybe even twice. Two good passes are not out of the realm of possibility here, especially when you're lifting less than the guy at the snack bar all afternoon.

In the very first Super Bowl, played in California as well, Green Bay Packers quarterback Bart Starr tossed 16 of 23 passes for 250 yards, and two touchdowns. He had one interception but the Packers thumped the Chiefs 35-10. Of course, it was a different era, and the Carolina Panthers might be slightly more menacing on defence than the 1967 Chiefs. But I can see Peyton posting similar numbers, and out-thinking the Panthers the way Starr did Kansas City.

Yes, his preference for shorter passes will likely mean fewer yards, first downs, and ultimately a lower scoring output for Denver. However, those numbers might also be just enough to win him the game's MVP prize, and ensure that he leaves just enough in the arm to lift the Lombardi Trophy.

Regardless of the outcome, Peyton Manning is the off-field MVP of #SB50 https://t.co/063PNHMQZF pic.twitter.com/cuwheET2f1
— Forbes (@Forbes) February 3, 2016