Let's get Monday Night Football back to being iconic 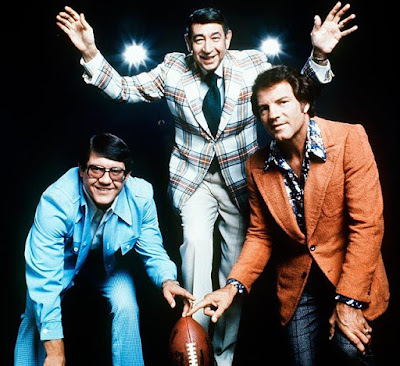 Football on Monday night seems a grand idea, no matter which way you dial it up.

Unless you're Tony Robbins or Hugh Hefner, most weeks start with a thud, a cold hard realisation that work awaits, the clothes hamper is festering and dinner might well be frozen.

Indeed, many of us need the relief of Monday night sports to ease us into the five day circus. But there's a problem: the ringmaster has found his way into our TVs to mess up Monday football, too.

Take the first two Monday games of the upcoming NFL season: Steelers - Redskins, Niners - Rams. Sure, they're interesting enough teams, and I get it, an east coast match-up complimented by a west coast clash. But this is the once legendary Monday Night Football!

How did it all become so, well, pedestrian?

It's the same issue with football in my backyard, the National Rugby League (NRL). Instead of being a beer cracking, after-work barbecuing extravaganza, Monday NRL games are really an afterthought.

I'm not even sure most fans know it's on, and that's largely to do with it being a cable TV offering only. Perhaps the TV stations are just happy to lock big deals in with sporting codes and the games have become throwaway details. Or maybe with all the content flying around now, programmers simply don't know what constitutes a feature game anymore.

Either way, rugby league won't be played on Mondays anymore and columnists are already rejoicing. Given its soft crowds, Thursday Night Football could well be next.

The NFL can get away with a casual strategy because of the size of the US population, and more importantly, the sheer number of cable subscribers. NFL games attract massive crowds, both to the stadium and the box, so there's no real danger of losing fans over, say, a lazy Jags - Bucs game. Oh, they'll be watching, even with three sheets to the wind.

In Australia, however, cable isn't as prevalent. Even if it was, I don't think fans care enough about Monday's night of football because the fixtures are rarely appealing, and consequently, crowds a smaller than at local kids pantomime. It's not a good look.

One sporting competition that seems to have the gist of things is the English Premier League, which sometimes will serve up a Monday nighter for the ages. Take a recent affair between London rivals Chelsea and West Ham: The Telegraph called it a whizz-bang of a match. No messing around, just give the people what they want.

The NFL equivalent might be heated iteration of Pats - Giants, or Packers - Bears. Not the Rams (sorry LA), just because you have a new stadium to show off. Or the Skins because, I don't know, it's an election year?

Listen, you have to love the nostalgic themed intro by Peter Berg that ESPN's MNF now uses. It's perfect. I'm in. But the scheduling needs work. It needs to draw a throng and fill the stadium. It needs to set digital recording boxes into a frenzy. And certainly test a few marriages.

The point of non-weekend football is to make it an event, right? You know, something you put your best undies on for that day. We have to want to rush home to kick off our shoes and fire up the grill.

Otherwise it just ends up being something we click on and move past, eventually landing on something with more action, like The Bachelor.
at September 07, 2016