The Hack Job On Hackenberg Begins 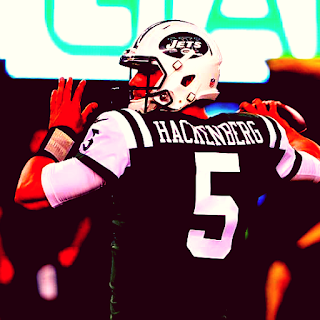 Jets quarterback Christian Hackenberg just whizzed another pass by his receivers and across the bow of a few journalists. After taming their quiffs, they took some notes and this actually made news last week.

The 24-hour media cycle spins on gang, where loose balls are ideal fodder for loose lips. The problem is such reporting tends to unfairly sink ships before the season has already launched. Some would argue the Jets were already in Titanic mode, heaping water from the decks while the violins play. That may be, but can we at least wait until August before screaming 'Rose'?

It's so early for this sort of conjecture, even by internet standards. Besides, has it ever occurred to anyone that maybe Hackenberg wants to hit reporters with a football? I used to be a reporter and sometimes I want to hit reporters with footballs. Heck, if you gave me a football right now I'd probably toss it at the wall just to rebound it back at myself!

Think about it: You're trying to learn your team, its offense -- just hoping to feel comfortable out there -- and some schmo in khakis and sipping on a V8 is looking for any opportunity to say you're a bust. His pen is eagerly poised against his pad, ready to scribble down any single miscue. Anything. Shoelace untied? Forget about it. Jockstrap on backward? You're gone.

Wouldn't you be throwing a a few spirals his way?!

Even if they were errant throws at an OTA, they were probably sideline lobs that just happened to miss the hands, in which case they'd have landed near reporters who probably shouldn't have been standing so close, anyway.

That Hackenberg HIT reporters, as just about every web publication has gleefully reported, is kind of like reporting 'Hackenburg hits his head on the inside of his helmet'. (Please don't copy and paste that last line in your Twitter feed. Fake news is funny and all, but it's also not). It's just so unnecessary and well, boring! I mean it's not like the kid has seen enough on-field time to suggest he'd never heave a few toward the Gatorade tank.

Oh, and just in case you wanted to cement your negative views of Hack, SportsCenter tells us he's the 40th ranked quarterback in fantasy football -- because those rankings usually relate so closely to reality.

Maybe we should all just eat a fortune cookie every morning before making a decision on breakfast.